Mud Volcano- another wealth of nature 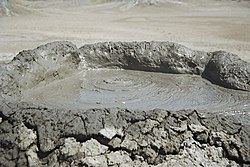 Over a thousand mud volcanoes are known to exist in the world, and some 400 of those are in the coastal area of Azerbaijan.

While mud volcanoes (also known as “sedimentary volcanoes”) never grow to the size of a normal volcano, topping out at around 10 km in diameter and 700 meters in height, (among the largest mud volcanoes in the world are Boyuk Khanizadagh and Turaghai, both in Azerbaijan) they do occasionally get the chance to show off, as happened in 2001.

Every 20 years or so, one of these mud/gas volcanoes will ignite deep below the surface and create a massive explosion. While generally not dangerous to people, as they are far outside of most city centers.

There is a silver lining to having a country covered in mud volcanoes. Mud volcanoes are closely associated with hydrocarbon and petrochemical stores underground, hence the gas trying to escape to the surface. A few of these gas leaks are constantly on fire, shooting small perpetual flames into the air and some believe that these perpetual flames are strongly connected to the appearance of the Zoroastrian religion in Azerbaijan some 2,000 years ago.[1]