Home Things to do Theaters

Origin of Azeri nation’s theatrical art relates to national holidays and dances. Elements of theatricality were contained in many kinds of national creativity accompanying national festivities, traditional holidays and other occasions. On 10 March 1873 under the guidance of Hasan bey Zardabi and with the participation of students of the Real School of Baku a performance was held – M.F.Akhundov’s “Vizier of Lankaran khanate” comedy was showas heldwn. The professional Azerbaijani theatre was originated after this very performance. In 1919, separated troupes joined up and the theatre acquired the state recognition 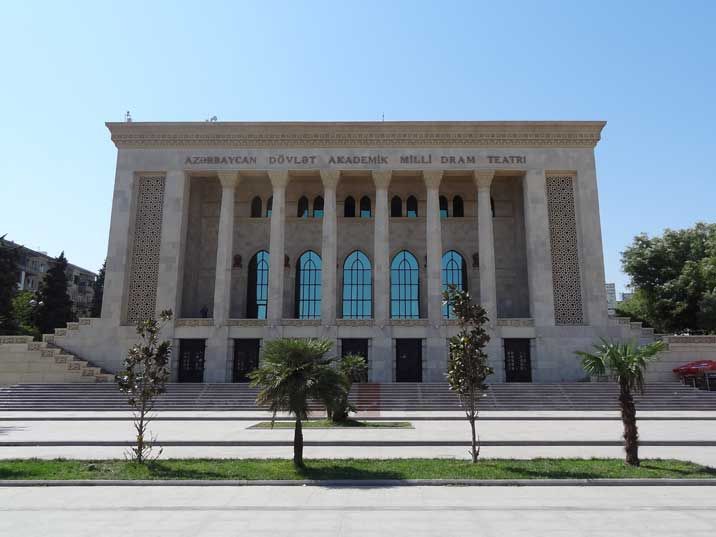 The Akhundov Azerbaijan State Academic Opera and Ballet Theater was built in 1911. The theatre was built at the request of millionaire Daniel Mailov and funded by Zeynalabdin Taghiyev. According to an urban legend, Mailov and his brother were not invited to a housewarming ball of a famous opera singer from Baku whose new house (now the head office of SOCAR) was one of the most outstanding pieces of architecture in the city. The Mailovs therefore decided to erect a building of their own outdoing the “tactless” singer. In 1910, famous Russian soprano Antonina Nezhdanova visited Baku giving several concerts at various clubs and performance venues. On a ball organized on the occasion of Nezhdanova’s departure at the local casino, she was asked whether she would like to visit Baku again. Her response was negative followed by a concern that in a city of so many wealthy people no one would fund the construction of a decent opera theatre where singers could fully demonstrate their musical talent. Daniel Mailov who had grown to admire both Nezhdanova’s voice and persona during her tour decided to use this opportunity and offered her to revisit Baku in one year to attend the opening of a new opera theatre, which he would order to build in her honour.

The theatre was founded in 1994 by Bakhtiyar Khanizadeh, an actor of the Azerbaijan State Theatre of Young Spectators. He worked closely with students of the Azerbaijan State University of Culture and Arts and selected the ones he considered fit to establish the pioneer mime theatre studio in Azerbaijan. For the next 11 years, the theatre was based in the building of the Theatre of Young Spectators until relocated to the building of the Shafag Cinema. In 2000, the theatre received the status of a state theatre.

Beginning in 2000, the theatre has twice housed the Himjim International Pantomime festivals. As of 2009, it has toured 12 countries, its repertoire including 24 plays by both local and foreign playwrights. The theatre was first established on December 20, 1920 as a State Free Satirical agitational theatre, however on April 29 it was renamed to Baku Workers’ Theatre. In 1937 the name was changed to Azerbaijan State Red Banner theatre of the Russian drama. The theatre was founded in 1928, when a Russian troupe made a performance here for the first time. An Azerbaijani troupe, created on the basis of drama circle of pioneers affiliated with the Baku Club of Sailors became a member of this theatre, in 1930.

In the first years of its existence, the theatre staged plays of Russian writers, which were constituted the repertoire of Young Spectators’ Theatres of other cities of the USSR. In the 1930s, plays of Azerbaijani dramatists were included in the repertoire of the theatre: In the streets by Jafarov and Melik-Yeganov (1932), Nargiz (1936), Ayaz (1937), Gizil Gush (Golden bird) by Seyidzade (1938), and Mammad the Partisan by Isgandarov and Sabit Rahman (1939).

In 1936, the theatre was named after Maxim Gorky.

The puppets come in size from a few centimetres to double human growth.

The theatre building was erected at the Baku Boulevard when there was no greenery yet. The exhaust ventilation system was superseded by forced ventilation. When the movie theater was opened to the public in June 1910, its administration advertised the features of full air change, occurring every 15 minutes and special ozonator. In 1921, according to project of Azerbaijani architect Zivar-bey Akhmadbeyov the theatre was cardinally rebuilt for theatre “Satyragite”. Since 1931 the theatre serves its current function, becoming independent in 1965. 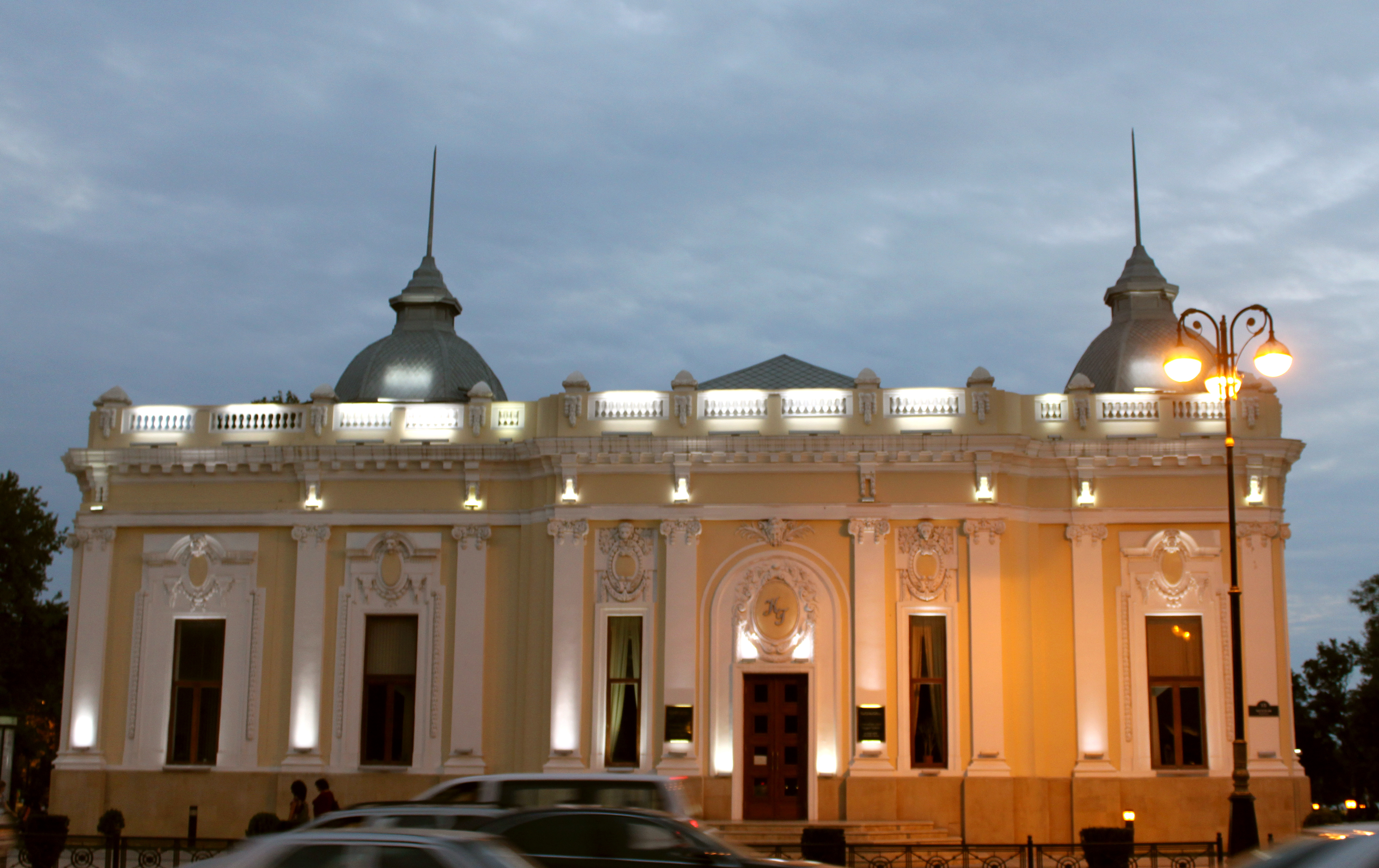 The Green Theatre is an open-air theatre in Baku, the capital city of Azerbaijan. The theatre seats 2500 spectators.

The theatre was built in the mid-1960s on the initiative of the city’s major of the time Alish Lambaranski. The Green Theatre was built as a venue intended for important cultural events.

In 1993, the theatre ceased functioning. In August 2005, Ilham Aliyev, the President of Azerbaijan ordered to carry out repairs works in the theatre. 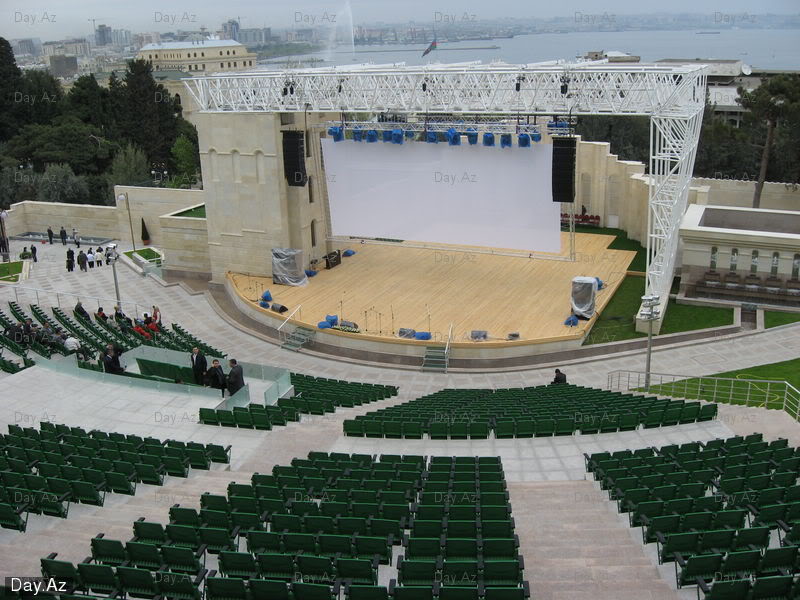